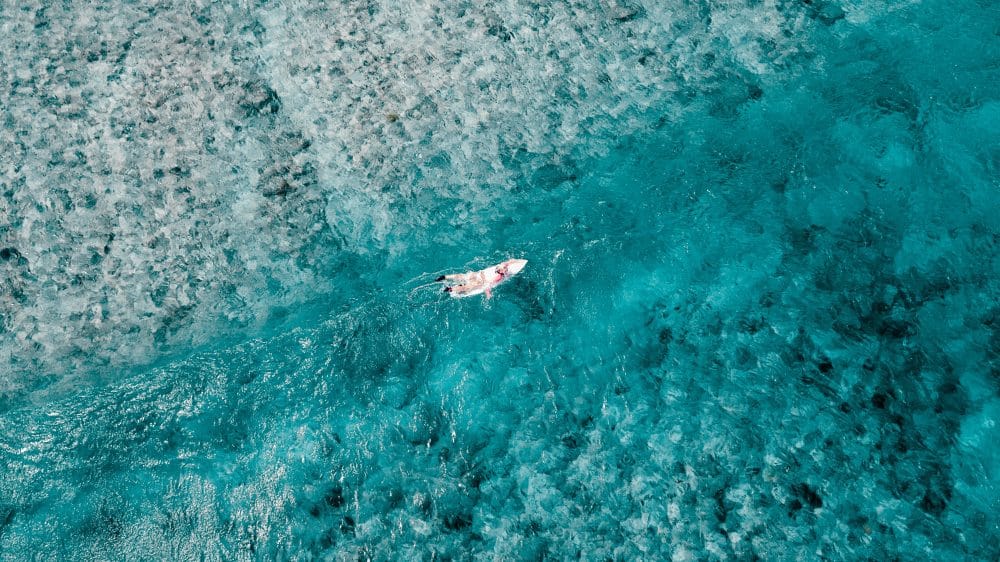 Why SIX Places around the world signed sunscreen bans 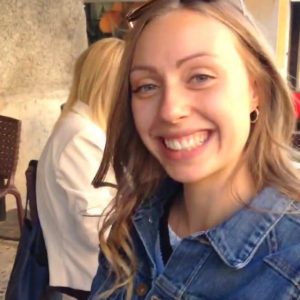 Approximately 60% of coral reefs are currently threatened by several impacts, including chemicals found in cosmetic sun products. Therefore six places all over the world have so far taken regulatory action by banning toxic sunscreen ingredients on their ground.

One of the forerunners is the U.S. Virgin Islands which signed a bill into law in July 2019, outlawing all imports, and sales of sunscreens containing the chemicals oxybenzone and octinoxate, which are harmful to the country’s coral reefs.

Hawaii, another state in the US, has voted to ban the sale of sun protection products that contain reef damaging chemicals. As Hawaii’s representative Chris Lee stated: “In my lifetime, our planet has lost about half its coral reefs. We’ve got to take action to make sure we can protect the other half as best we can”. 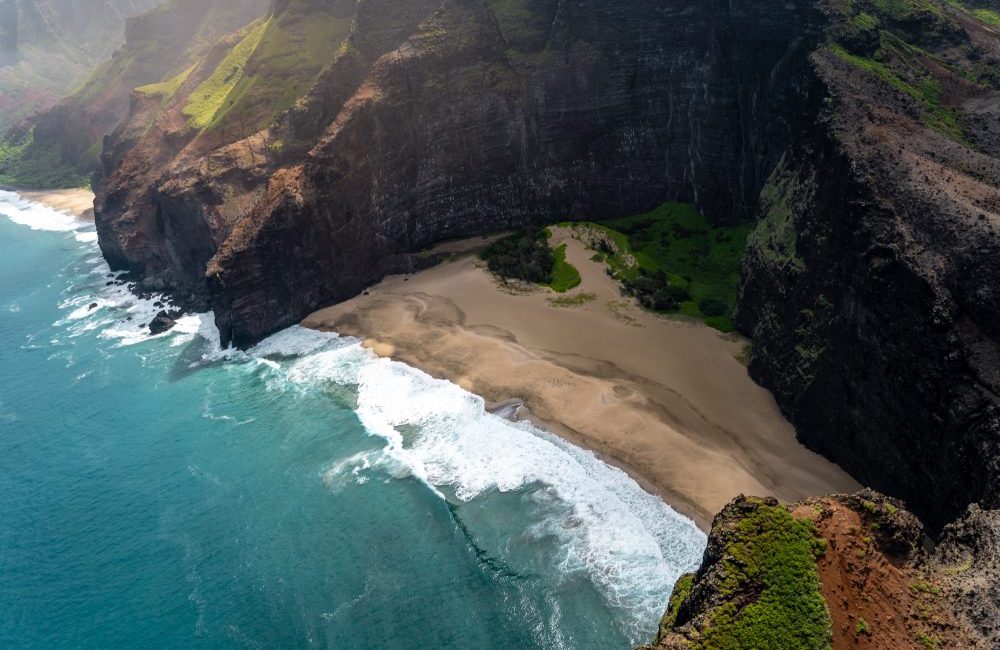 The same hope of putting pressure on sunscreen manufacturers to produce mineral sunscreens motivated Key West, a U.S. island, to enact a non-biodegradable sunscreen ban on its businesses. Mayor, Teri Johnston takes the ban very serious, stating: “There are thousands of sunscreens out there, and we have one reef. We have an opportunity to do one small thing to protect that. I believe it’s our obligation”.

After Scientists conducted research on the effects of Oxybenzone and Octinoxate on reefs, the island of Bonaire, an island municipality of the Netherlands, also unanimously voted to ban the sale of reef-killing sun protection on its shores by 2021. 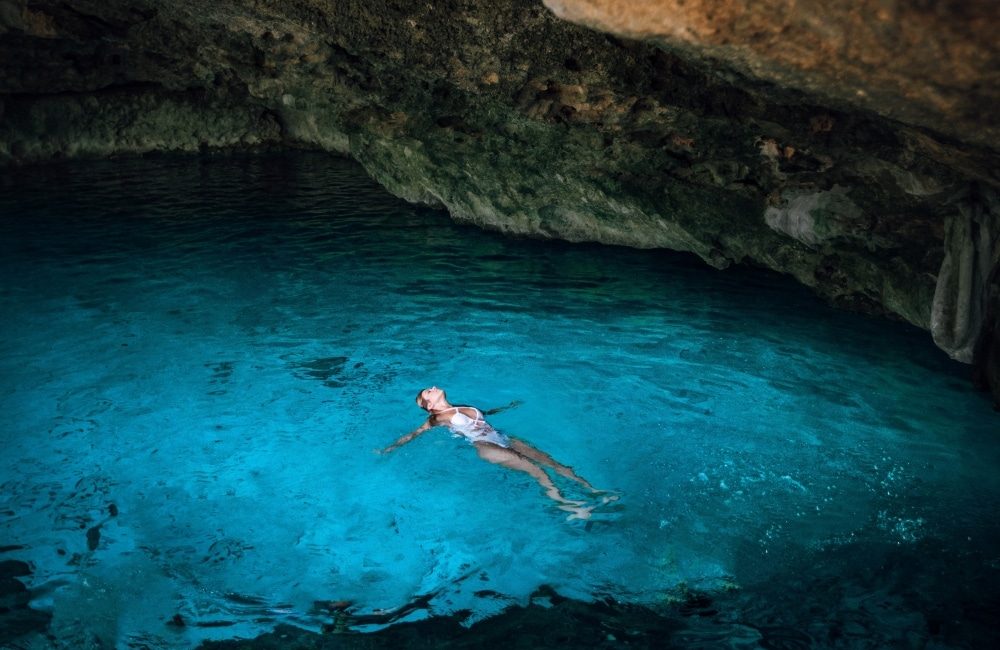 Palau is also set to become a country to enact a sunscreen ban. Starting in 2020 businesses could be fined up to 1,000 Dollars for selling non-biodegradable sunscreens.

And also Mexican vacations spots, like swimming holes in the Riviera Maya, now strongly ask their visitors to only use mineral and biodegradable sunscreen.

Why Did These Regions Ban Certain Sunscreen Ingredients?

The first suspicion that sunscreen might be bad for coral reefs and valuable ecosystem environments came about in the early 2000s when researchers in different parts of the world revealed that commonly used UV filters cause various species of coral to bleach. By now, many different studies are providing serious evidence that especially Oxybenzone and Octinoxate threaten the health of corals and other marine life in several ways. 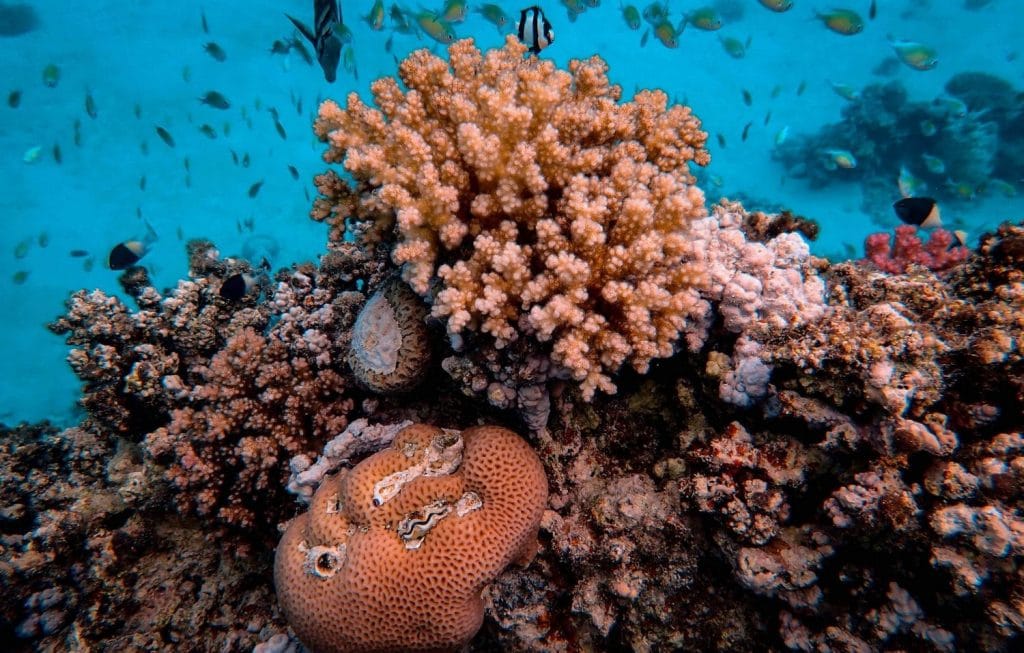 Coral reef in the Red Sea in Egypt

Another study, published in the “December 2013 issue of Ecotoxicology”, took a closer look at Benzophenone-2, also called BP-2, another UV filter commonly used in sunscreen.They found that even at a very low concentration, the chemical can quickly kill juvenile corals, cause colorful corals to bleach, and can potentially induce or increase mutation in corals by causing damage to their DNA. But not only corals are harmed by the stated chemicals, also other parts of marine life are endangered as this graphic from NOAA illustrates: 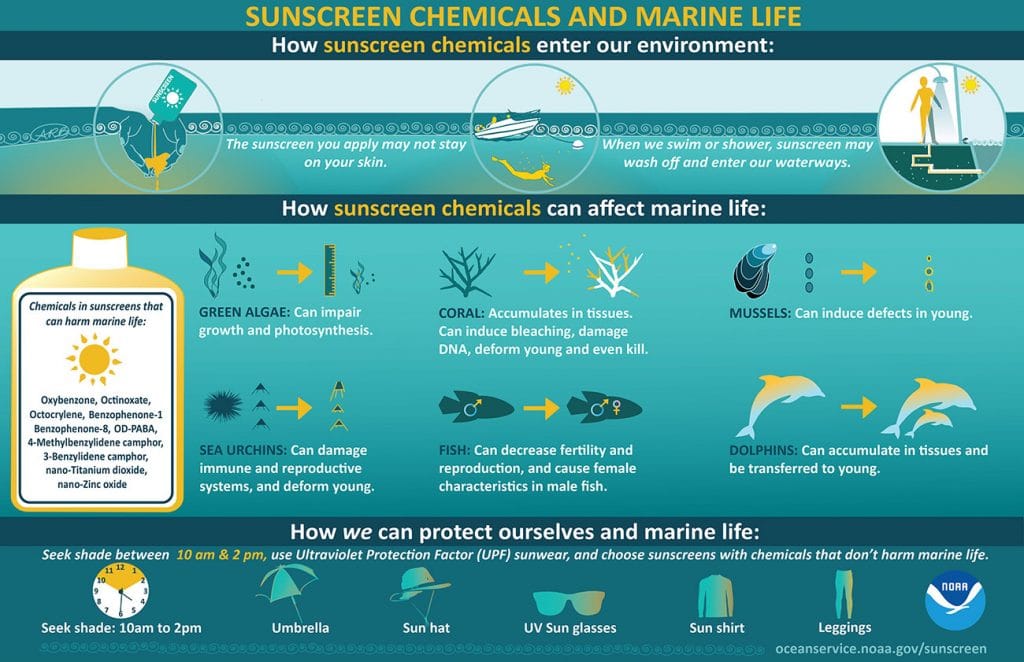 What many don’t know: chemical UV filters are toxic for all kinds of sea animals, not only corals

How Big is The Problem of Sunscreens in The Ocean?

According to official data of the UNWTO (World Tourism Organization), it can be estimated that 10% of sunscreen products produced are used in tropical areas with coral reefs. It is evaluated that, on average, about 25% of the sun protection applied to the skin are released in the water over a course of a 20 minutes swim. According to these numbers, it is believed that up to 10% of the world’s coral reefs are threatened by sunscreen chemicals.

The conclusion by the Environmental Health Perspectives states: “Because human use of tropical ecosystems and coral reefs is progressively increasing, we predict that the impact of sun-screens on coral bleaching will grow considerably in the future on a global scale. Actions are therefore needed to stimulate the research of utilization of UV filters that do not threaten the survival of these endangered tropical ecosystems.”

Not only are coral reefs and ecosystems harmed by chemical components in sunscreen, but studies by the FDA (U.S. Food and Drug Administration) for example, have shown that also human health is endangered by common chemical UV filters. Scientists discovered that chemical UV filters penetrate the user’s skin and enter a person’s bloodstream at high concentrations.

Which UV Filters Are Safe to Use For And Your Family?

What we know from the research and studies we have today is that the only safe UV filters for coral reefs and human health to use is Non-Nano Zinc Oxide or Non-Nano Titanium Dioxide. By choosing a mineral sunscreen with either of those two UV filters you are choosing a product that is safe for you and nature!

About the author: Hanna Oltmanns loves the outdoors and is the first one to enjoy every beam of sunshine possible. Through traveling several countries over the past few years, she became more and more aware of the great need for sustainability in every aspect of our daily life. Through working with Suntribe she is joining the movement of sustainable production of organic cosmetic and helps to raise awareness about the issue of harmful chemicals in personal care products for humans and nature alike. 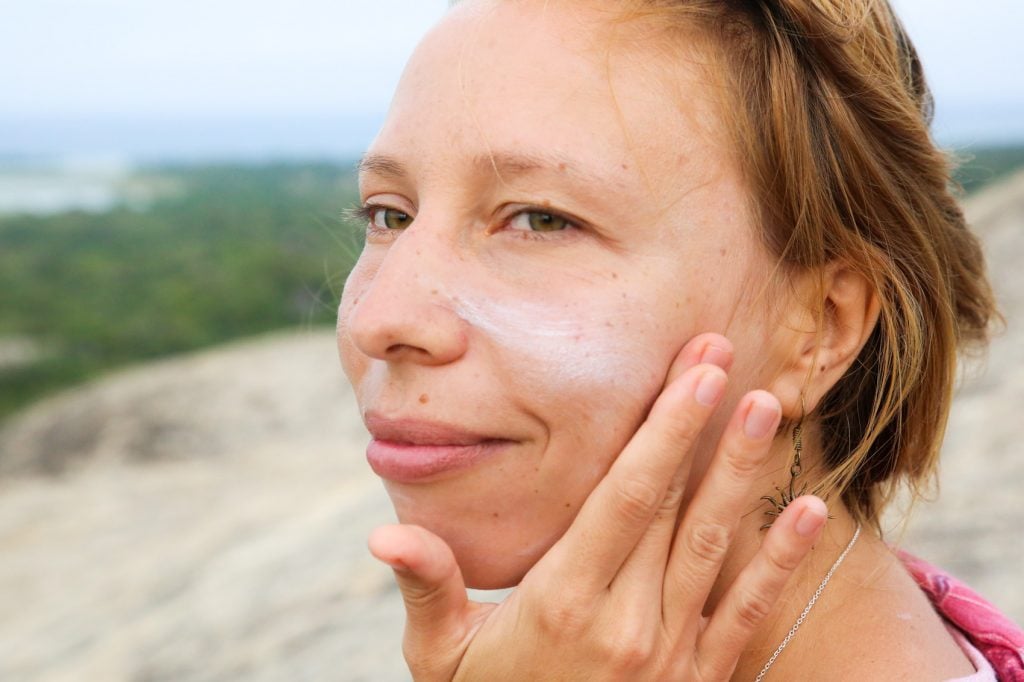 Why Zinc Oxide is The Best Choice For Natural Sunscreens

Back to blog!
Find your mineral sunscreen here

Corona: How to Stay Safe And Sane & Help Others

Continue Shopping Go To The Cart
Buy for kr350.00 more and get free shipping